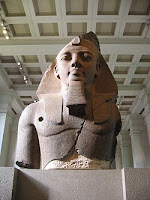 Funding Issue: The government of British Columbia in the midst of an economic downturn that has cut its tax revenue is passing some of this budgetary loss onto the arts community by drastically cutting the funding of most arts organizations. The preparation for the winter Olympics continues, with its obvious expenditures with no sense of how the hosting of these events will benefit the province in the long run. The edifices of the Olympics will remain in most cases to serve the elite.

When civilizations fall into ruin and disappear, the glory and the might are gone but their art remains. What does that say about where we should put our priorities?

"Our lasting art is first cut when the wolf arrives." David Fraser

Shelley said it well in his sonnet. It is ironic that the art remains. The clay tablets telling the story of Gilgamesh remain albeit in fragments, but still the story remains.

I met a traveller from an antique land
Who said: Two vast and trunkless legs of stone
Stand in the desert. Near them on the sand,
Half sunk, a shatter'd visage lies, whose frown
And wrinkled lip and sneer of cold command
Tell that its sculptor well those passions read
Which yet survive, stamp'd on these lifeless things,
The hand that mock'd them and the heart that fed.
And on the pedestal these words appear:
"My name is Ozymandias, king of kings:
Look on my works, ye Mighty, and despair!"
Nothing beside remains. Round the decay
Of that colossal wreck, boundless and bare,
The lone and level sands stretch far away.

- Shelley
Posted by Floating World at 8:29 AM