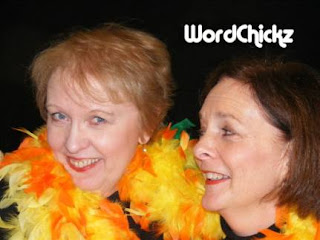 Start saving up your buck, buck bucks for the WordChickz premiere of ECLUCKTOMANIA, an eclectic mix of humorous and poignant spoken word, monologue, merriment and more with WordChickz Cindy Shantz and Judith Millar.

Cindy and Judith have always been in love with words and delight audiences with their original material which emphasizes that all of us have layers. One of Shantz’s poems shows a child’s perspective in church; a short story describes what happens when two very different women sit beside each other in an airplane; a monologue illustrates how the main character, a waitress, changes her life because of an encounter with a customer.

Shantz has been published in newspapers and anthologies and is the founder of Easy Writers, a Vancouver Island writing group which recently published an anthology of their writing, One Sweet Ride. She is also cofounder of WordStorm, Nanaimo’s popular spoken word event, where she has been a featured performer.

Millar’s material takes a humorous look at everything from the communication problems that can arise between men and women, to a poem she wrote from the point of view of dog. She’ll share an essay on how she learned to belly dance, the tale of a philandering librarian who gets his comeuppance, and take a satirical stab at technology. A serious writer as well as a humorist, she’ll conclude with a story about a woman coming to terms with her mother’s Alzheimer’s. An award-winning writer of short stories, essays, poems and song lyrics, Millar was recently awarded the John Kenneth Galbraith Literary Award for one of her short stories.

As an opening act for Eclucktomania, and also as a part of the Port Theatre’s Random Acts ‘Studio-on-Stage’ series, Starlight Reverie will play Celtic music, gypsy swing, romantic pop, tangos and mazurkas.

Shantz and Millar look forward to seeing you at Eclucktomania. Buck! Buck!