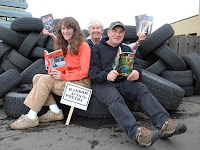 Before first light I barefoot dance across the moon-silver-coated grass.

RANDOM ACTS OF POETRY COMING TO NANAIMO AND OCEANSIDE


It’s that time of the year again when the leaves are turning, the bears are denning and the poets are, well, poeming.

From October 5-11, three local poets armed with satchels of rhymes will be launching surprise poetry readings at the unsuspecting public on the streets of Nanaimo and Oceanside.

David Fraser, Kim Goldberg, and Leanne McIntosh will be joining 28 other acclaimed poets across Canada, from Victoria to Newfoundland, to commit unplanned poetic deeds and give away hundreds of books during Random Acts of Poetry week, a nationwide literacy initiative now in its sixth year.

David Fraser, Nanoose Bay poet and spoken-word promoter of WordStorm in Nanaimo and Oceanside WordWorx in Parksville, (www.wordstorm.ca) will be hitting the bricks with his poetry in Oceanside, reading from his books Running Down the Wind, and Going to the Well and giving away copies. Look for him at Thrifty Foods, Oceanside Community Arts Council Gallery, Coombs Market, Quality Foods, and the Parksville SOS.


“The idea is to get poetry and poetry books into the hands of ordinary people who might not have a lot of exposure to poetry,” says Goldberg, who joined the program three years ago.

“Poetry is a doorway to the heart,” she adds. “I have been astonished at how moved strangers have been when I read them a poem and then give them the book afterwards. Some have had tears in their eyes.”

Goldberg will spend the week wandering the streets and alleys of downtown Nanaimo’s “red zone” reading poems and giving away copies of her latest book RED ZONE - a verse map of Nanaimo’s homeless population.

Watch for Nanaimo poet Leanne McIntosh committing random poetic acts along Stewart Avenue, the Harbourside Walkway and Maffeo Sutton Park, where she will be giving away copies of her two poetry collections The Sound the Sun Makes and Liminal Space. She will also share her poetry with Literacy Nanaimo, the Nanaimo Brain Injury Society and Woodlands Secondary School.


Random Acts of Poetry is funded by The Canada Council for the Arts and is a project of
the Victoria READ Society, a non-profit literacy organization established in 1976. The project is the brainchild of Victoria poet Wendy Morton.

Every October the week-long campaign steers the nation’s poets out of the coffee houses and onto the streets, where they read poems to strangers and collectively give away hundreds of poetry books in donut shops, bistros, bus shelters, police stations, grocery stores, curling rinks and anywhere else a poem can be unfurled. Participating poets also bring their poems and books to ESL and Adult Literacy classrooms across the country.

3 photos attached: various poses of the trio of local poets (Kim Goldberg, Leanne McIntosh, David Fraser) who will be committing Random Acts of Poetry in Nanaimo and Oceanside October 5-11, 2009.
Posted by Floating World at 3:22 PM